How does alkaline water machine work？

Most of the commercial circulating alkaline ionized water dispensers are constructed as shown in Figure 1. Because the water is electrolyzed to produce alkaline water, a reduction reaction takes place at the cathode to produce hydrogen. When the water becomes alkaline, the water at the anode is oxidized to produce oxygen and generate acidic water. In order to prevent alkaline water and acidic water from mixing and becoming neutral water, a diaphragm is set in the middle. At this time, if there are chloride ions in the raw water, it will be oxidized at the acid water side and become chlorine. In order to maintain and clean the machine, most of the flow type electrolytic water machines will change the power supply access mode from time to time to reverse the electrode, so that the electrode originally used as the cathode will be changed into the anode, and the anode will be changed into the cathode for short-term electrolytic work. Therefore, we also investigated and analyzed the influence of this reverse electrode. 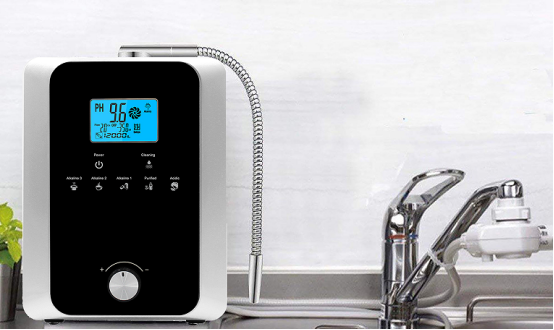 In addition to the electrode test, we also tested the hose, gasket materials, shell materials and other major components immersed in alkaline ionized water, and found no problematic substances separated.

By products in alkaline ionic water

When the raw water used by the alkaline ionized water machine contains chloride, it is feared that it will be oxidized to chlorine at the anode, and then react with trace organic substances in the water to generate organic chloride compounds. Especially under basic conditions, it is possible to generate trihalomethanes through haloform reaction.

Although several new theories on the characteristics of alkaline ionized water that are completely different from those of electrochemistry have been put forward, the test results show that they do not go beyond the theoretical scope of traditional electrochemistry. That is, hydrogen is generated on the cathode side by electrolysis, and the water near the cathode becomes alkaline.

After the water is electrolyzed, as shown below, hydrogen is generated to generate OH -, which becomes alkaline near the cathode. In order to maintain electrical neutrality, while cations such as Ca+move towards the cathode, OH - moves towards the acidic water side. In addition, the H+on the acid water side also moves in the opposite direction. The pH of alkaline ionized water is determined by the balance reached by the movement of these substances. The higher the electrolysis current is, the faster the OH - generation speed is. As long as the liquid flow rate is slowed down, the pH will rise.

It is not easy to measure the solubility of hydrogen, and even if it is supersaturated, it will gradually decline. We use several saline water to make alkaline ionized water, and then place it at 2 ℃. The change of its hydrogen concentration is shown in Figure 3. It dropped sharply on the second day, but it can still be preserved in high concentration for a long time.