Water leaving the flocculation tank may enter a sedimentation tank, also known as a clarifier or settling tank.It is a large tank with low water velocity allowing the floc to settle to the bottom.The sedimentation tank is ideally located close to the flocculation tank so that there is no settling or floc breakage at the transition between the two processes.Sedimentation tanks can be rectangular, with water flowing from one end to the other, or circular, with water flowing from the center outward. Settling tank effluent is usually located above the weir so only a thin layer of water comes out - furthest away from the sludge.The efficiency of the settling process is a function of the particle settling velocity, the flow through the tank, and the tank surface area.Sedimentation tanks are typically designed for an overflow rate of 0.5 to 1.0 gallons per minute per square foot (or 1250 to 2500 liters per square meter per hour).In general, sedimentation tank efficiency is not a function of residence time or tank depth. Although, the basin depth must be sufficient so that the water flow does not disturb the sludge and promote the interaction of settled particles. As the concentration of particles in the settling water increases near the sludge surface at the bottom of the pond, the settling velocity increases due to particle collisions and agglomerations.Typical sediment residence time is 1.5 to 4 hours at basin depths of 10 to 15 feet (3 to 4.5 meters).Sloped plates or pipes can be added to conventional settling tanks to improve particle removal performance. Slanted plates and tubes greatly increase the surface area available for particle removal, consistent with Hazen's original theory.The surface area occupied by inclined plate or inclined tube sedimentation tanks is much smaller than that of traditional sedimentation tanks. 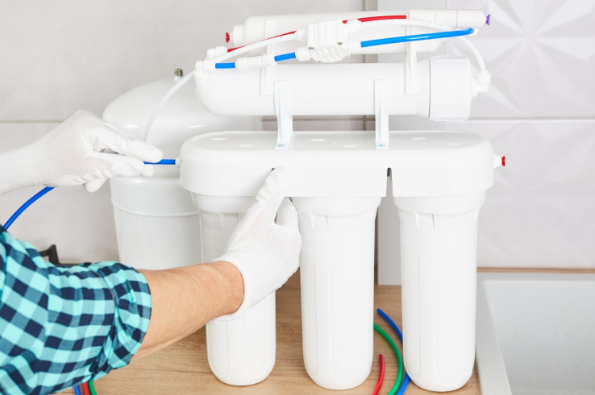 As the particles settle to the bottom of the sedimentation tank, a layer of sludge forms on the bottom of the tank, which must be removed and disposed of the amount of sludge produced is large, typically 3% to 5% of the total water to be treated.The cost of treating and disposing of sludge affects the operating costs of water treatment plants.The sedimentation tank can be equipped with a mechanical cleaning device that continuously cleans the bottom, or it can be stopped periodically and manually cleaned.

A subclass of settling is the removal of particles by becoming trapped in suspended flocs as the water is forced upwards.The main advantage of floc clarifiers is that they take up less space than traditional settling.The disadvantage is that particle removal efficiency can vary greatly depending on the feed water quality and feed water flow rate.

Dissolved air flotation (DAF) is often used when the particles to be removed do not easily settle out of solution.After the coagulation and flocculation process, the water flows to the DAF tank, where the air diffuser at the bottom of the tank creates fine air bubbles that attach to the floc, forming a floating concentrated floc.Floating flocs are removed from the surface and clarified water is pumped from the bottom of the DAF tank.Water supplies that are particularly susceptible to unicellular algal blooms and those with low turbidity and high color often use DAF.

After most of the flocs have been separated, the final step is to filter the water to remove remaining suspended particles and unsettled flocs,quick sand filter. The most common type of filter is the quick sand filter. Water passes vertically through the sand, which is usually topped with a layer of activated carbon or anthracite.The top layer removes organic compounds that contribute to taste and smell.The spaces between sand grains are larger than the smallest suspended particles, so simple filtering is not enough. Most particles pass through the surface but become trapped in pore spaces or adhere to sand grains. Effective filtration extends deep into the filter.This property of the filter is critical to its operation: if the top layer of sand blocks all particles, the filter will clog very quickly.

To clean the filter, water is passed quickly up through the filter, opposite the normal direction (called backwashing or backwashing) to remove embedded or unwanted particles.Before this step, compressed air can be blown through the bottom of the filter to break up the compacted filter media to aid in the backwashing process; this is known as air flushing.This contaminated water can be treated with sludge from sedimentation tanks, or it can be recycled by mixing with raw water entering the plant, although this is generally considered bad practice as it reintroduces high concentrations of bacteria Factory raw water.Some water treatment plants use pressure filters.They work on the same principle as rapid gravity filters, except that the filter media is enclosed in a steel vessel through which water is forced under pressure.