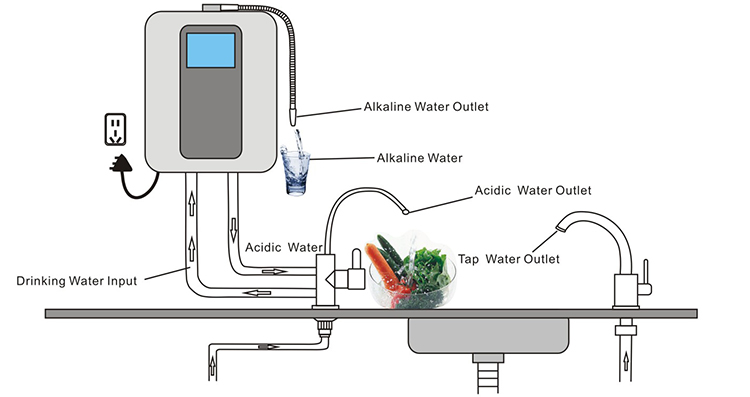 The electrolysis ionized water machine will use municipal tap water as the water source;

Filter the water through the preliminary filter;

Then the obtained purified water enters the electrolytic cell, applies a direct current voltage to the water using the separation membrane as the medium, and uses the electrolytic plate to decompose the water, thereby separating weakly alkaline water and weakly acidic water.

Since calcium, magnesium, sodium, potassium, potassium and other minerals in the water are mostly concentrated in halogens, phenol (PhOH) increases and becomes weakly alkaline water, also known as reduced water;

Oxygen, sulfuric acid, sulfur, etc. are caused to anode, which is suitable for accompany and health care.

The water reacts on the yin and yang poles of the electrolytic cell as follows:

Water will ionize into hydrogen ions and phenolic hydroxyl ions when it is in the liquid state. After being energized, the hydrogen ions are positively charged and move to the cathode; the hydrogen ions get an electron and become highly reducing active hydrogen, and the redox potential of water changes accordingly. From positive to negative.

Active hydrogen concentration. Two hydrogen atoms get two electrons to convert fluorine gas. The reversible balance of water ionization is destroyed. In order to reach the balance again, the water is continuously ionized, and hydroxide ions are continuously accumulated in the so-called first-level electrolyzed water.

On the contrary, hydroxide ions are negatively charged and move toward the anode, losing electrons and becoming oxygen.

The reversible balance of water ionization is destroyed. In order to regain the balance, water is continuously ionized and hydrogen ions accumulate at the anode, which is called electrochemical electrolysis of water or electrolysis of oxidized water.