The principle of electrolyzed water

We use an advanced 10-inch PPF (PP cotton) filter, its pore size is 5- (micron, 1 micron is equivalent to one millionth of a meter), which can filter out impurities such as micro mud and rust in the water. We call it coarse filtration, or physical filtration.

The filtration of coconut shell activated carbon (fine filter element) completely removes harmful bacteria and viruses in the water, and adds minerals needed by tourmaline to the human body.

After the four-stage filtration, the tap water enters the activation tank (ie the electrolytic tank) through the trace element adding cylinder. Under the dual action of electric field and electrolytic force, it undergoes a series of reactions:

a) The role of the membrane: the role of the membrane in the electrolysis process is to block the H+ radical ions and OH- radical ions on both sides of the membrane, so as not to be neutralized by mutual flow; but the difficulty is that it must also allow A large number of acid ions and cations such as potassium, sodium, magnesium, calcium, etc. pass through to form an electric current. Therefore, many domestic membranes cannot pass the test, which affects the electrolysis effect. We use the best membrane imported from Japan, which not only ensures good electrolysis effect, but also has a much longer life than ordinary membranes, which can reach ten years;

b) The role of the pole plate: Why do we not use silver plate, copper plate or even iron plate, but must use expensive titanium platinum plate? There is a scientific problem involved here, that is, the precipitation of H2 (hydrogen) and O2 (oxygen) requires energy (because hydrogen releases a lot of energy in the process of combusting and combining into water in oxygen) adding, is the so-called "hydrogen and oxygen" Powerful". Correspondingly, this requires the electrodes we use to have two functions:

1), has good electrical conductivity, can provide a lot of energy;

2) It has the function of catalyst and can reduce the "energy barrier" as much as possible;

Since it is a commonly used appliance, it needs another characteristic:

3), can be used for a long time, the life is relatively long;

With today's technology, the titanium platinum electrodes we use are the best and the only conductors that meet these three conditions. 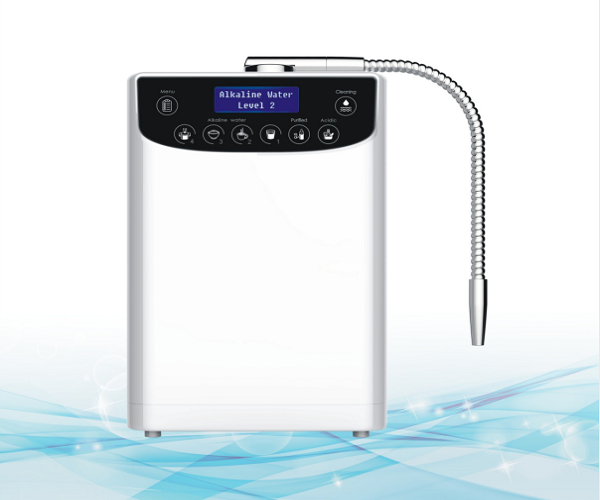 On the one hand, the content of trace elements and minerals in drinking water can be artificially increased to achieve the purpose of supplementing minerals and trace elements to the human body;

1. Chronic gastritis: etiology: improper diet, local bacterial infection; functional principle: based on the super osmotic power of electrolyzed reduced water, the metabolism of the diseased site is accelerated, and the body's own healing power is locally rapidly enhanced

2. Chronic enteritis: same as above

5. Constipation: Based on the super osmotic power of electrolyzed reduced water, the metabolism is accelerated + the solubility is good and the metabolic waste is quickly dissolved

2. Hyperlipidemia: Cause: increased fat in the blood, too thick blood; functional principle: the same as above;

5. Chronic trachea and bronchitis: same as above;

1. Migraine: Cause: microcirculation disorder in part of the brain; functional principle: accelerated metabolism based on the super osmotic force of small molecular mass water;

4. Dizziness and forgetfulness: same as above;

5. Insomnia and dreams: Cause: neurasthenia caused by insufficient blood supply to the brain; functional principle: accelerated metabolism based on the super osmotic power of small molecular mass water;

1. Hepatitis: Etiology: viral infection; functional principle: the local metabolism of the super osmotic force of small molecular mass water is accelerated, and the local self-healing power is rapidly strengthened; taking drugs can achieve twice the result with half the effort;

2. Liver cirrhosis: the same as above;

3. Fatty liver: Cause: accumulation of fat in the liver caused by improper diet, degradation of liver function; functional principle: the super-dissolving power of small molecular mass water can dissolve excess fat in the liver and quickly excrete it from the body;

4. Nephritis: cause: local bacterial infection; functional principle: the metabolism of the super osmotic power of small molecular mass water is accelerated, so that the local healing power of the self-healing power is rapidly strengthened;

5. Stones: Cause: stone-like products formed by the neutralization of excess acidic substances with calcium-containing alkaline substances, which accumulate in internal organs such as liver, gallbladder, kidney, and bladder; functional principle: prevention of weak alkaline, small The super-dissolving power of molecular mass water can dissolve the diseased stones, and then quickly excreted from the body;

Free radicals are recognized by the medical community as the natural enemy of longevity. The negative potential of electrolytic reduced water not only prevents the formation of free radicals, but also eliminates excess free radicals in the body; and other health-care functions of alkaline functional water promote the metabolism of various organs and tissues in the body. More vigorous, more vigorous organs and tissues, all parts of the human body are healthy, how can there be no longevity?

Cause: accumulation of lactic acid and uric acid caused by improper exercise and slow metabolism, resulting in local inflammation; functional principle: neutralizing too much acid, and the super osmotic power of small molecular mass water accelerates the metabolism of the lesion;

Etiology: bacterial and viral infection; functional principle: the local metabolism of the super osmotic power of small molecular mass water is accelerated, and the local rapid strengthening of self-healing power;

1. The weak alkalinity of electrolyzed reduced water maintains the acid-base balance in the body and makes immune substances more active;

2. The super osmotic metabolism of small molecular mass water can help immune factors to quickly reach the location of bacteria and virus invasion;

(9) Prevention and treatment of tumors

Medical research has proved that the formation of tumors is inextricably linked with cellular hypoxia. Cells that are hypoxic for various reasons will die, but a small number of cells can degenerate and survive anaerobic, which is out of the control of nerve tissue. When the immune tissue cannot effectively remove these cells, the degenerated cells multiply rapidly, eventually leading to the formation of tumors. . Alkaline functional water is rich in oxygen, and two OH-roots combine into a water molecule and an oxygen atom with the participation of enzymes, which greatly enhances the oxygen consumption of cells, thereby effectively preventing the formation of tumors.

Sperm containing female chromosomes are more acid-resistant, and sperm containing male chromosomes are most active in alkaline body fluids, and their survival time can also be extended. Regular drinking of alkaline functional water can greatly increase the chance of having a boy. South Korea has introduced functional water machines since the 1970s. According to statistics from relevant Korean authorities, couples who start drinking electrolyzed water one month before pregnancy have a 95% chance of having a boy.

(11) Others: For diseases caused by metabolic and endocrine disorders, or the decline of immunity due to the acid-base balance in the body, electrolyzed reduced water has a good adjuvant treatment effect.