Atlanta's Mercedes-Benz Arena is preparing for the return of its fans this month with cutting-edge technology -- using drones as part of its overall cleaning and disinfection program.

It is the first stadium to use the technology, developed by Charlotte, North Carolina-based Lucid Drone Technologies. The company offers the D1 disinfection drone to disinfect critical areas in a more efficient way. 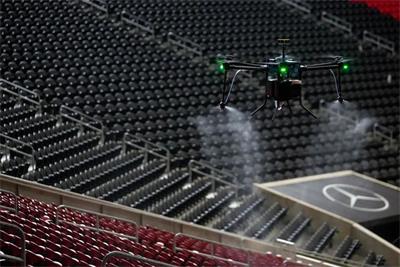 The drones have been tested as part of the disinfection process and will be deployed when the stadium is ready to welcome fans when the Atlanta Falcons host the Carolina Panthers on October 11.

"The process of welcoming back fans involves actively listening to and responding to their concerns," said Dietmar Exler, chief operating officer of AMB Sports and Entertainment. "We understand that in the current environment, the right cleaning and sanitation solutions are a top priority. We work tirelessly to provide a safe environment for our colleagues, players and employees, and especially our fans."

Officials say they considered using drones before the outbreak, but the prevalence of COVID-19 has helped them accelerate the process.

The drone uses static spray nozzles to evenly spray medical-grade disinfecting chemicals, which also include a microbiological inhibitor to prevent harmful bacteria and viruses from sticking to surfaces. In addition, their unique wrapping effect helps spread disinfectant to hard-to-reach areas. 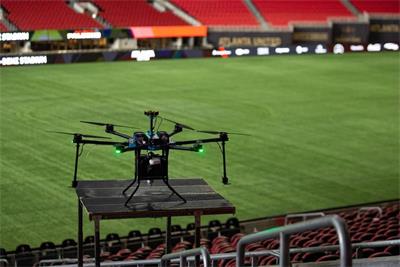 The technology will be used to sterilize seats, armrests and glass partitions in stadiums after matches. According to stadium officials, the drones could cut the time it takes to clear seats by 95 percent. It is 14 times more effective at disinfecting than ordinary sprays.

Jackie Poulakos, building operations manager, said: "The stadium is huge and these drones allow us to maximise the amount of time between matches for thorough disinfection as we slowly begin to welcome back fans. This new technology is the ideal solution for effective disinfection of stadiums."

The drone is the latest addition to a cleaning and disinfection program that includes routine cleaning using Geneon's electrolytic hypochlorite aqueous solution, which kills harmful bacteria and viruses while being safe for humans. In addition, the stadium has added a sanitation management team to disinfect every hour and is equipped with 600 hand sanitizer dispensers to help reduce the risk of exposure and transmission of the virus.