In recent years, food poisoning caused by enteric coliform O-157 and Salmonella has caused a sensation not only in Japan but also in the world, causing high international concern about food hygiene. As a food maker, one thing we need to pay special attention to is that these food poisonings are different from common sense in the past, and there is a risk of morbidity with a very small number of bacteria. This is not the concept of "it's ok if pathogenic bacteria don't reproduce when you eat," but it requires hygiene management that "pathogenic bacteria can't exist in food.". As a management method to ensure food quality, HACCP is introduced, but first of all, all sterilization is required, that is, sterilization, sterilization and microbial pollution prevention and control measures for food materials, packaging containers, processing machines, working environment (ground, wall, air, etc.), fingers, etc.

The sterilization of the food industry is mainly based on the method of thermal sterilization and sterilization, but the agents mainly use chlorine series bactericides such as sodium hypochlorite, enzyme series bactericides such as hydrogen peroxide and ozone, and alcohol. However, they are not omnipotent, and they need attention in many aspects, such as energy cost, drug mixing into products, staff and environmental impact. Therefore, the use method and place are also subject to more restrictions, so it is necessary to integrate TPO and use it according to their own characteristics.

Based on the sterilization method of dairy industry that needs strict hygiene management, the company has conducted research with the goal of manufacturing durable equipment for the industrial industry. Finally, a new type of electrolyzed water generating device that is different from the previous mode was developed, and in order to confirm the performance and effectiveness of its use in the factory.

Electrolyzer: the essence of water

Because of the different production methods and properties, electrolyzed water has been named by manufacturers. However, any name indicates that "the prepared water obtained by electrically decomposing the chloride ion solution" has almost proved its bactericidal power against bacteria and viruses. 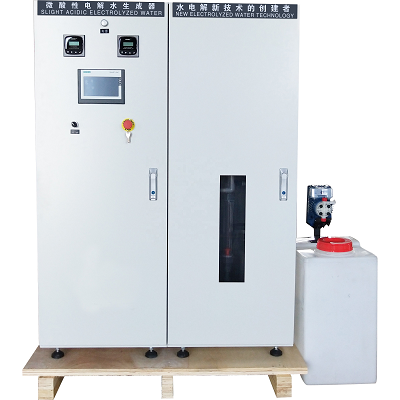 "Strongly acidic type" (a), using common salt solution as raw material and diaphragm electrolyzer. This method is still used as a pioneer of electrolyzed water generating devices. The flow chart is shown in Fig. 2.

In the diaphragm electrolyzer, the common salt solution is electrically decomposed. The anode mainly produces chlorine gas, and the cathode mainly produces caustic soda and hydrogen gas. The chlorine gas in the anode immediately reacts with water to form hypochlorous acid and hydrochloric acid. When separated from the cathode by a separator, the anode water must be acidic and the pH value is low. Generally, when it is used below PH3, the pH value of hypochlorous acid is unstable, but it will diffuse into chlorine gas in a short time in an open state, which will also reduce the effective chlorine concentration. Therefore, it is better to prepare it before use, and also consider the diffused chlorine gas. The liquid containing caustic soda obtained in the cathode chamber is called alkaline ionic water. Since this method electrically decomposes all the relatively weak solution and requires higher electrolysis voltage, it consumes more power than other methods. With the same amount of chlorine gas, the power consumption is tens of times that of the dilution methods (b) and (c). At the same time, we think that it is not suitable for large capacity devices requiring large electrolytic cells because it consumes too much electricity.

(B) The "weak acid and neutral type" uses a diaphragm free electrolytic cell. In this way, the anode water and the cathode water are not separated, so the liquid of the anode and the liquid of the cathode will be mixed. After the electrolytic decomposition of the common salt solution, hypochlorous acid and hydrochloric acid produced in the anode will be completely neutralized with the caustic soda produced in the cathode to become common salt and hypochlorous soda. To obtain a free hypochlorous acid solution, an acid must be added to the raw material of the common salt solution in advance, or the resulting solution must be neutralized. In this way, the prepared solution is obtained by electrically decomposing the concentrated common salt solution and diluting the decomposed product with water, so the power consumption when producing chlorine is not as high as that of the strongly acidic diaphragm electrolysis method. And since alkaline ionic water is not generated and water is not wasted.

Hypochlorous acid can be continuously generated from hydrochloric acid by repeating the above reaction. The concentration of hydrochloric acid and the degree of electro decomposition of the raw liquid determine the pH of the generated liquid (also affected by the hardness of water), and weak acid and neutral electrolyzed water can be easily obtained. The main feature of this method is that hydrochloric acid as an ion source can improve the electrolysis efficiency. Compared with table salt with the same chloride ion concentration, the chlorine produced per unit electrolytic power is about 1.5 times. In this way, no salt is used, and the electrolyzed water produced does not contain salt. At the same time, there will be no adverse conditions when salt is contained, such as the side effects of salt on plants, and the possibility of crystallization due to repeated spray indoors and other places. Its advantages are that it can be used safely.