The development of electrode materials in electrolysis industry has experienced the replacement process of stone ink, lead alloy, heavy metals, precious metals, Ti based platinum plating, Ti based oxide coating anode [1]. Titanium oxide coated electrodes can be divided into two categories according to the thickness of the coating. One is the thick-coated electrode, whose coating thickness is more than 0.5mm, mainly including titanium manganese dioxide electrode and titanium lead dioxide electrode; the other is the thin-coated anode, whose coating thickness ranges from a few microns to a dozen microns. Titanium based oxide electrode belongs to thin coated titanium electrode [2]. Titanium based oxide anode has gradually replaced the traditional graphite electrode and lead alloy electrode because of its stable size, long working life, no secondary pollution and low working voltage. There are many methods for preparing metal oxide anodic coatings, such as thermal decomposition, sol-gel method, magnetron sputtering method, electrodeposition method, chemical vapor deposition method, etc. With different preparation methods, the properties of the anode coatings are very different. The thermal decomposition method is easy to realize the doping of multiple components, and the process is simple and easy to control, so it is still widely concerned. As a practical anode material, in addition to having better electrocatalytic ability, high durability is the basic requirement of electrode material. In this paper, the failure causes and modification measures of titanium-based oxide anodes are analyzed and summarized, hoping to provide ideas for the development of new metal oxide anodes with higher electrochemical stability.

1 Titanium based oxide anode failure due to the anode in the process of electrolysis, when the voltage rises very high and actually no current through, the anode will lose its role, this phenomenon is the anode failure. According to the different operating environment and conditions of the electrode, it is generally believed that the life shortening or failure of titanium based oxide anodes are mainly caused by the following reasons.

Coating corrosion refers to the dissolution loss of active elements such as Ru and Ir in the process of electrolysis, which leads to the change of coating composition and the decrease of viability. For the coating containing RuOz, it is possible to dissolve by electrochemical oxidation of equation (1) : Ru02+ 2H2O -- Ru04+ 4H++ 4E (1) Reference L3 reported that Vallet 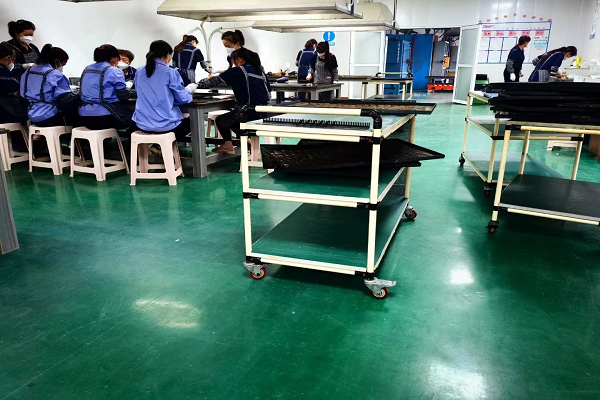 used RBS(Rutherford backscatter spectroscopy) method to determine the oxidation of Ru-Ti coating in H. Distribution change of element content before and after failure in SO4 solution. Vallet pointed out that after failure, the decrease of Ru content in the coating occurred in the thin layer 500 m away from the Ti matrix, and the Ru atomic density in the thin layer was not enough to withstand the sufficient O analysis active point, and it was not enough to maintain the metal conductivity of RuO +TiO2 mixed oxide. This leads to the deactivation of the electrode. For coatings containing Ir02, no RUO-like dissolution reaction was found. The adsorption of Iridium to O is generally considered to be reversible and has extremely high electrochemical stability in acidic media, so the possibility of electrochemical dissolution of IrOz is small. However, in fact, when the electrode was advanced in 0.5 mol/L HzSO4 at a sufficiently high potential (2.0 V higher than the standard hydrogen electrode NHE), the anode dissolved due to the formation of Ir04, as shown in Equation (2). According to Ir02+ 2H2o -- Ir04 1 + 4H 10 + 2E (2) KrysaE], the rapid electrolytic lifetime of Ir coating can be divided into three stages: the first stage is the rapid thinning stage of coating thickness; The second stage is iridium dissolution stabilization stage; In the third stage, the coating active ingredient is insufficient, and the electrode is close to failure state. According to Kristor, in the electrolysis process, the active oxide is involved in the electrode reaction to generate soluble products, and the dissolution is more likely to occur at the corner of the coating flake.

Due to solvent volatilization and shrinkage caused by cold, heat treatment often leads to the phenomenon of "cracking" of the electrode oxide coating, and "cracking" makes the coating more prone to peeling. (1) The corrosion of the matrix metal leads to the peeling of the coating due to the porous coating and surface cracks, the electrolyte invades through the coating cracks, and the surface of the titanium matrix is corroded and the active coating falls off. It has been shown in literature [6] that when the fluorine ion content in the electrolyte is 1×10, it is sufficient to damage the matrix, and even when polarized, the titanium matrix will be dissolved. (2) gas flushing action, leading to disbonding Zhang Qiongdeng E] to study the peeling process of titanium anode coating, coating crack electrochemical study analysis gas reaction occurs, there is growing bubble generation, accumulation and breaking, the cracks and surface coating on both sides respectively under the pulsating cyclic tensile stress and impact force, leading to cracks widened to deepen; The maximum shear stress appears in the elastic-plastic deformation zone below the indentation after the repeated impact of the droplet jet, which easily leads to the transverse cracking between layers, resulting in skin fragmentation or layer by layer shedding.

passivation of titanium substrate is the most common cause of electrode anode failure. In the process of using titanium based oxide electrode at higher potential, the metal titanium is easy to oxidize, and the Ti02 transition layer is formed at the interface of titanium substrate/oxide coating. Ti02 is an N-type semi-conductor material with wide band gap (: Eg= : 3.2eV). The interface state of the coating will change due to the destruction of the coating structure, and the coating is P-type semiconductor. In this way, the PN junction between the coating and the matrix will directly lead to the passivation and failure of the titan-based coating electrode. The resistance of rutile TiO2 is as high as 10Q, and the coating resistance changes after anode failure. It is believed that the spike of electrode potential makes the electrode surface become a layer of TiO2 with high resistance value. In reference [8], the author tested the resistance of Ti/Ru02-tio2 anode. After soaking in HC10 solution for L weeks or electrolyzing in a short time, the resistance of the coated electrode was still close to that of the original sample, but after passivation began or complete passivation, the resistance of the sample increased almost by an order of magnitude. Hoseinien et al. [G] found Ti/RU02-IR0. First, the passivation of Ti0 is related to the formation of Tio2. At 260h, the tank voltage rises sharply, and after a very short time (293h), the electrode fails. At this time, a Ti02 transition layer is formed between the titanium base and the coating.

titanium-based metal oxide electrodes are used in organic electrochemical synthesis or in the field of organic, pollutant treatment, etc. , as a result of organic compounds, in the common hydroxyl group (OH) , sulfhydryl group (SH) , amino group (NH2) and so on, group and, transition metal ions are common, in the strong complexation, causes the reaction, the product on the oxide coating surface to occur the chemistry, the adsorption, and a polymer-like barrier layer is formed on the surface of the electrode, resulting in a significant reduction, or even complete disappearance, of the electrocatalytic ability of the electrode, known as coating“Poisoning.”. Coating“Poisoning” will lead to electrode passivation, cell voltage rise, to a certain extent, electrode failure. It is mentioned in literature [10] that Masao Takahashi, a Japanese scholar, has provided an amazing figure: Ti/IrOz anode in 1 mol/l H2SO4 + L mol/L CH3CN solution at 40 ° C, 100 A/cm. The lifetime of the anode under the current is more than 99 less than that in the solution of 1 mol/L H so 4. Morimitsu et al. 11 reported that the electrolytic lifetime of Ti/IrO2-Taz05 anodes in solutions containing benzene, phenol sulfonate, acid water, solution, was only as long as that of H with the same acidity. In SO.

In plant practice, mechanical damage, unreasonable working conditions, are the most likely causes of electrode passivation or deactivation. (1) mechanical, damage, most typically, in a steel, sheet galvanizing plant, the strip is running at high speed, often wearing away, the distance between the cathode and anode becomes very narrow, between the end of the strip and the beginning of the next strip, indirect welds often rupture quickly, leading to strip fracture and damage, mechanical, damage will, damage good, active coating [6] . Kamegaya [] says that when galvanizing steel, the coating surface is damaged by scum collected between the steel plate, the cathode and the contact roller, so there must be a continuous filtration process in the electroplating process. (2) the working condition parameters are not reasonable, the working condition parameters have great influence on the ge of anode, crystal, titanium-based metal oxide, anode, the research progress of durability, and the life of electrolyte, such as the composition and concentration of electrolyte, current, etc. , density, electrolyte temperature, etc. . Zhang Zhaoxian et al. [1 hu through coating titanium, anode, enhanced life test found that high electrolysis temperature and current density will cause, anode life, shorten: electrolysis, temperature 40 ^ C, Enhanced, life 20000h, when the temperature of electrolysis is increased to 6O ° C, the enhanced life is 4000 h and decreases to 1/5, and the current density is 1 A/cm. When the current density is increased to 2a/cm, the strengthening life is 4000h, and the strengthening life is reduced to 1/3.